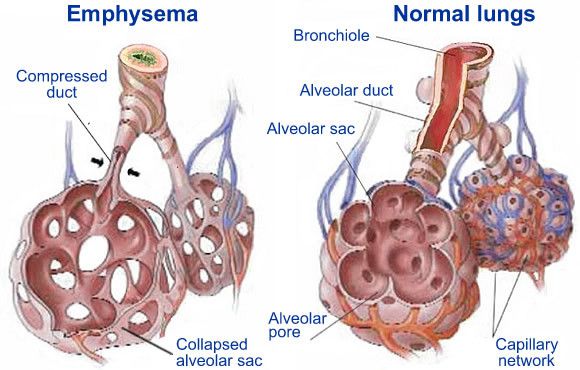 Emphysema is a type of chronic obstructive pulmonary disorder which involves damage to the air sacs (alveoli) in the lungs. It is a form of chronic lung disorder which causes difficulty in breathing. Emphysema is also called as obstructive disorder because airflow or exhalation is slow or stopped due to over inflammation of the alveoli. Emphysema results when thin membrane lining on the air sacs is damaged and is beyond repair. Thus, rupturing of air sacs leads to reduction in surface area of the lungs which in turn reduces the amount of oxygen reaching the blood stream. This is because damaged alveoli don’t work properly and old air is trapped inside the alveoli leaving no space for fresh air to enter in the sacs. Hence, lungs slowly enlarge and require more efforts for breathing. Shortness of breath, sputum production and productive cough are the major symptoms of emphysema. Similarly, difficulty in breathing while exercising might also be witnessed.

Smoking is one of the major causes of emphysema among vast majority of population. As per the studies conducted smokers are six times more likely to be victim of emphysema as compared to non smokers. Apart from smoking alpha-1 antitrypsin (AAT) deficiency is another cause of emphysema. However, this is a minor cause of this medical condition as compared to smoking. AAT is a natural protein circulating in human blood whose function is to prevent white blood cells from destroying normal tissues. Deficiency of AAT is a genetic disorder due to which white blood cells continuously damage the normal tissues. Exact estimates are not known but it is stated that approximately 2% to 3% of people with emphysema have deficiency of AAT. Similarly, long time exposure to environmental cigarette smoking might also lead to the damage of risk of development of emphysema. Work place exposures are believed to be the cause in 10% to 20% of the cases.

Currently, there is no cure for emphysema however; if smoking is quit then the symptoms of emphysema can be controlled. Thus, for diagnosis purpose spirometry test is prescribed to individuals who are aged above 30 years to 40 years. This medical device measures the amount of airflow obstruction present. Other tests such as chest X-ray and complete blood count are also useful test for the diagnosis of emphysema. For the treatment purpose bronchodialators, corticosteroids, oxygen medications and other antibiotics such as erythromycin are prescribed.

According to the American Lung Association, COPD is currently the fourth leading cause of deaths in the United States. Similarly, According to World Health Organization (WHO) estimates, asthma affects nearly 300 million people worldwide, while COPD affects approximately 210 million people. The WHO further states that these numbers will continue increasing under the influence of factors such as increase in proportion of urban population, changing life style, growing number of tobacco smokers and rising pollution level.

Geographically, North America is the leading geography followed by the European market. Market growth of these regions is accounted due to the presence of large base of population suffering from COPD. Asia-Pacific and Rest of the world in the future are expected to emerge as the fastest growing economies in this market.

Pulmonx , Bioxyne Limited, Intrexon Corporation, Icure Pharmaceuticals, Inc. Kamada Limited and others are the major players which have their therapeutic candidate in the pipeline for the treatment of emphysema.