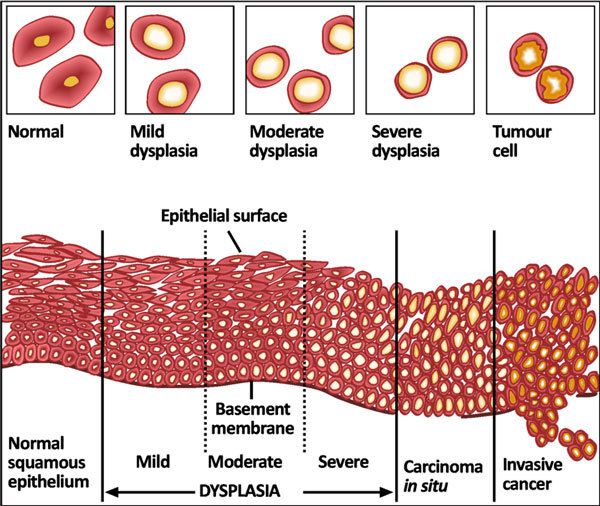 Cervical dysplasia, also known as cervical intraepithelial neoplasia (CIN), is a premalignant transformation, which is characterized by abnormal growth of cells over the surface of the cervix. This condition is curable and is not considered as cancer and ranges from mild to severe forms depending upon the concentration of abnormal cell formation. However, sometimes this disease may not require intervention and can eliminate on its own due to strong immune response, and if left untreated it may also lead to cervical cancer. Chronic form of cervical dysplasia is mainly caused due to infection of the cervix with sexually transmitted human papilloma viruses, especially through its 16 and 18 types. This disease is very common among females of age between 25 to 35 years of age, but it can affect women of all age groups. Cervical dysplasia can also be caused in people having multiple sex partners, early pregnancy or early child birth, and other illnesses and is often devoid of any visible symptoms, but it can be detected via human papilloma virus DNA test. Cervical dysplasia can be treated via monotherapy or combination drugs, ablation therapy and resection (removal of the abnormal area) therapy. On the basis of the degree of the condition the cervical dysplasia market can be classified into three major segments namely, mild dysplasia (CIN1), moderate dysplasia (CIN2) and severe dysplasia to cancer (CIN3).

Major driving factors for the growth of cervical dysplasia market include, increasing occurrences of various sexually transmitted diseases (STDs), increasing smoking habits, alcohol and drug abuse, increasing usage of immunosuppressant drugs and others. The increasing prevalence of various STDs has considerably increased the chances of occurrence of several mild to severe forms of cervical dysplasia. Moreover, increasing prevalence of CIN, thus can also lead to cervical cancer, where mild and severe CIN can be treated via several therapeutic procedures, thus contributing towards the growth of this market. Increasing use of tobacco, smoking and drug abuse also increase the chances of contracting this disease, and global rise in smoking habits will also contribute towards this market’s growth. Increasing disease forms have led to growth in usage of various drugs including immunosuppressants that can rise in the risk of contracting this disease. Recent technological advancements in therapeutic procedures for treating various forms of this disease have also caused an increased demand world over, which will continue to contribute towards the growth of cervical dysplasia treatments market.

Geographically, North America dominates the cervical dysplasia market followed by Europe. Major factors responsible for the dominance of these regions over other markets were high awareness levels among people about the disease and its treatments as well as well-established healthcare infrastructure in these regions. Asia-Pacific region holds immense potential for growth as this region shown the fastest growth in the segment. Major factors responsible for this region’s fast rate of growth were increasing disease occurrences and increasing awareness about the disease and its treatments. Demand for advanced treatment options, current advancements and the ongoing clinical trials to enhance the therapeutics for the disease will also contribute towards the growth of Asia-Pacific cervical dysplasia treatments market. Some of the key players operating in the cervical dysplasia market are Advaxis, Inc., AnGes MG, Inc., Eisai, Inc., GlaxoSmithKline plc, Inovio Biomedical Corporation, and Photocure ASA.